Binding Energy : According to Heisenberg atomic model, the nucleus contains protons and neutrons and electrons revolve round the nucleus in different atomic orbits. The experimentally measured mass of nucleus is found to be less than the sum of masses of its constituent particles (protons and neutrons). The difference in mass is known as mass defect.

where mp = mass of a proton

mn = mass of a neutron

According to Einstein's mass energy equivalence relation, the disappeared mass (Δ m) has been converted into energy as

This energy equivalent to mass defect which is responsible for keeping the nucleons bound inside the nucleus is known as binding energy.

It is the energy required to dissolve the nucleus into its constituent particles far from each other.

Average Binding energy: It is the energy separated for the individual nucleon given as 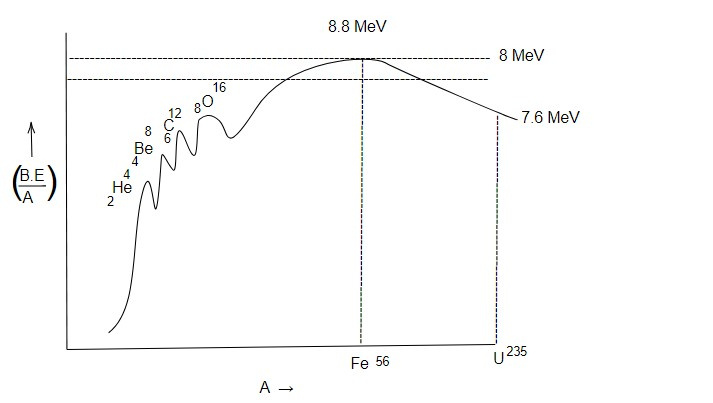 1. The Binding energy per nucleus goes on increasing rapidly for lighter elements then becomes maximum and again fall off for heavier elements.

3. Iron has maximum Binding energy per nucleon which is also reflected by its abundance in nature.

5. There are peaks in Binding energy curve for the nuclei whose atomic mass number is integral multiple of 4 (i.e A = 4n)

Nuclei have more Binding energy per nucleon than their neighbours.

The number of neutrons and protons found in stable nuclei are plotted in graph which is known as stability curve or Segre chart.

For lighter element weight atomic number z<20 only these nuclei having N/Z =1 i.e proton and neutron number equal are likely to be stable. 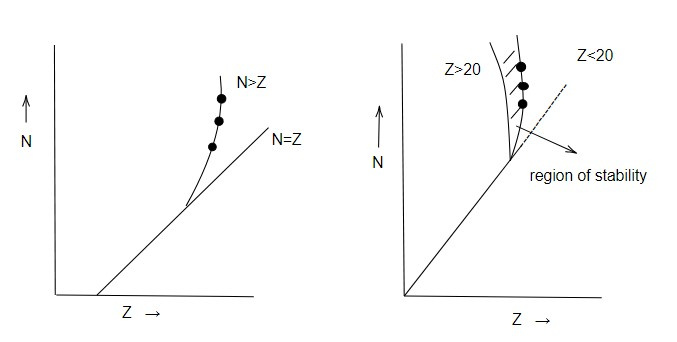 Those having ratio N/Z line above or below this line are unstable. For heavier nuclei the repulsive force between large number of proton decreases the nuclear attractive force and so to stable heavier nuclei must have greater number of neutrons than protons.

For stable nuclei, the number of neutrons must be upto a optimim value.

When the optimum number of neutrons required for stability is plotted against number of protons, then a region also known as stability region is found only those nuclei lying within this region are stable and lying above or below the region are unstable. Nuclei whose ratio N/Z lies in fringe of region are artificial radioactive nuclei.

Nuclear contains only protons and neutrons. The Electrostatics repulsive force between positively charged protons is much greater than the attractive gravitational force. So, the repulsive force should have disrupt the nucleus for this. A third type of attractive force has to arise which is nuclear force. Nuclear force exists between only two nucleons i.e force exists between proton - proton, neutron-neutron and proton-neutron.

Nuclear force between any two nucleons exists if the separation of them is about 2-2 fermi. Beyond this range (about 4 fermi), the nuclear force vanishes. When the nucleons approach nearer than about 1.4 fermi, they start repelling each other which prevents the nucleus from being collapsed.

There are two hypothesis existing about the strength of nuclear force between nucleons.

a. Hypothesis of charge independent

This hypothesis is verified on the basis of comparative study of Binding energy of hydrogen and helium. They are mirror nuclei having same atomic mass number but number of protons and neutrons interchanged. The Binding energy of Hydrogen is 8.5 MeV whereas that of helium is 7.7 MeV.

b. Hypothesis of charge symmetry

The nuclear force is limited within a short range of distance between two nucleons. Each nucleon inside nucleus interacts only with its nearest neighbour nucleons but not with all nucleons present. This property of nuclear force is known as Saturation property.

In any nucleus having atomic mass number A if each nucleon is assumed to interact with remaining (A-1) nucleons, then there are A(A-1)/2 total interaction pairs. Since interaction gives rise to nuclear force, the binding energy must be proportions to number of interaction pairs.

But Binding energy is found to vary directly on A. This concludes that the nuclear force exists only between nearest neighbour nucleons.

The nuclear force doesn't obey inverse square law and doesn't direct along the line joining two nucleons. So it is non central force which rather depends on relative orientation of nucleons with each other.

This model of nucleus was proposed by Neil Bohr according to which the nucleus is assumed as a electrically charged liquid drop having constant density but of varying mass similarities between liquid drop and nucleus.

1. The shape of liquid drop is spherical a equilibrium due to symmetric forces of surface tension. Similarly, the shape of nucleus is also spherical in stable state due to nuclear force.

3. The nucleons in nucleus play the same role as molecule does in liquid drop. The intermolecular force of attraction between molecules and nuclear force between nucleons ate same, both being short ranged force and having tendency to saturate.

4. The nucleons moves within the spherical enclosure due to nuclear potential barrier similar to the movement of molecules within liquid drop under the effect of surface tension.

5. The binding energy per nucleon for the nuclei is constant (about 8 MeV) which is analogous to the latent heat of vapourisation of liquid constant for different drops of liquid.

6. The liquid drop evaporates on raising the temperature due to increase in thermal energy. Similarly when energy is given to the nucleus (by bombarding it energetic projectile particles), then a compound nucleus is formed in excited state which emits nuclear radiation return into stable ground state.

7. When the liquid drop gains external energy, then the spherical shape of nucleus changed into ellipsoidal and finally breaks up into smaller drops. In a similar manner, the nucleus drop changes its shape from spherical to ellipsoidal and then dumb bell and finally breaks up into smaller nuclei. If it gains extra energy. The process is nuclear fission.

Bohr and wheeler theory of nuclear fission on the basis of liquid drop model.

Bohr and wheeler successfully explained the nuclear fission process on the basis of liquid drop model.

The nuclear fission of Uranium when bombarded by a neutron is as given by the reaction.

On the basis of liquid drop model, Weizsacher's gave the relation to find the mass of nucleus which is known as Weizsacher's semi empirical mass formula. He found the binding energy of nucleus very accurately by defining different energy term that contribute to total binding energy. This formula is in explaining the stability of nucleus and β decay process by unstable nucleus.

When the liquid evaporates completely, then the heat energy supplied is used up in breaking the molecular bonds. So, heat energy required is equivalent to binding energy of liquid drop.

m= mass of a molecule

where av is coefficient of volume energy term and has value 14 MeV.

where as is coefficient of surface energy term and value 13 MeV.

The nucleus contains z protons and +ze protonic charge. So there is Coulomb repulsive force between proton. The energy equivalent to work done against repulsion has to be spent for keeping the protons together. The energy is known as Coulomb energy term which has negative contribution to total BE coulomb energy term and is given as

where aa is constant of asymmetry energy term and has value 19MeV.

5. Pairing energy term: The nuclei having even even combination protons and neutrons are most abundant and stable in nature. Those having odd even or even odd combination are intermediate in stability. The nuclei having odd protons and odd neutrons are least stable. This indicates that the nucleons tend to exist in pair. The binding energy due to pairing of nucleons is given as

where ap is constant of pairing energy term and has value

Total Binding energy of a nucleus is given by the sum of all energy terms.

This formula is also known as Weizsacher's binding energy formula.

The mass of nucleus is given as

This formula is known as Weizsacher's semi empirical mass formula. 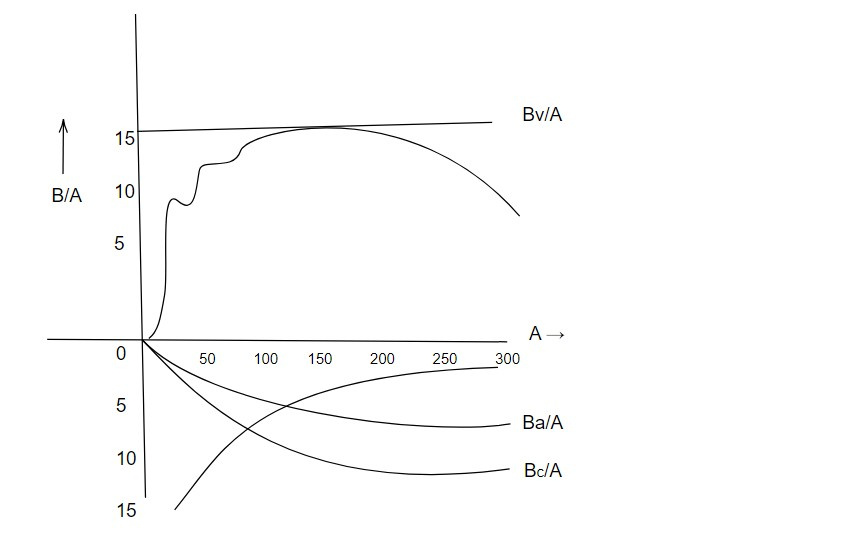 The Liquid Drop Model is a model used to explain the structure and stability of atomic nuclei. It was developed by Niels Bohr and John A. Wheeler in 1939 and is based on the idea that the nucleus can be thought of as a drop of incompressible liquid.

1. This model can estimates the binding energy and nuclear mass more accurately.

2. This model successfully explains the β decay among isobaric family.

3. This model explains the stability of nucleus.

4. This model also explains the nuclear fission and radioactivity.

1. It couldn't explain the stability of nucleus with magic number.

2. It couldn't explain the major magnetic moment and electric quadrupole moment and nuclear spin of a nucleus.

3. It couldn't explain the emission of β particle from a nucleus even they explain β decay.

4. It couldn't explain the spectrum of different particles like α, β and γ in term of their ranges.

This note is taken from Nuclear Physics, BSC physics, Nepal.