Dhamira (Termites, धमिरा in Nepal) are eusocial insects that are classified at the taxonomic rank of infraorder Isoptera, or as epifamily Termitoidae within the order Blattodea (along with cockroaches). Termites were once classified in a separate order from cockroaches, but recent phylogenetic studies indicate that they evolved from cockroaches, as they are the sister group to wood eating cockroaches of the genus Cryptocercus. Previous estimates suggested the divergence took place during the Jurassic or Triassic. More recent estimates suggest they have an origin during the Late Jurassic, with the first fossil records in the Early Cretaceous. About 3,106 species are currently described, with a few hundred more left to be described. Although these insects are often called "white ants", they are not ants, and are not closely related to ants.

Most worker and soldier termites are completely blind as they do not have a pair of eyes. However, some species, such as Hodotermes mossambicus, have compound eyes which they use for orientation and to distinguish sunlight from moonlight. The alates (winged males and females) have eyes along with lateral ocelli. Lateral ocelli, however, are not found in all termites, absent in the families Hodotermitidae, Termopsidae, and Archotermopsidae. Like other insects, termites have a small tongue-shaped labrum and a clypeus; the clypeus is divided into a postclypeus and anteclypeus. Termite antennae have a number of functions such as the sensing of touch, taste, odours (including pheromones), heat and vibration. The three basic segments of a termite antenna include a scape, a pedicel (typically shorter than the scape), and the flagellum (all segments beyond the scape and pedicel). The mouth parts contain a maxillae, a labium, and a set of mandibles. The maxillae and labium have palps that help termites sense food and handling. 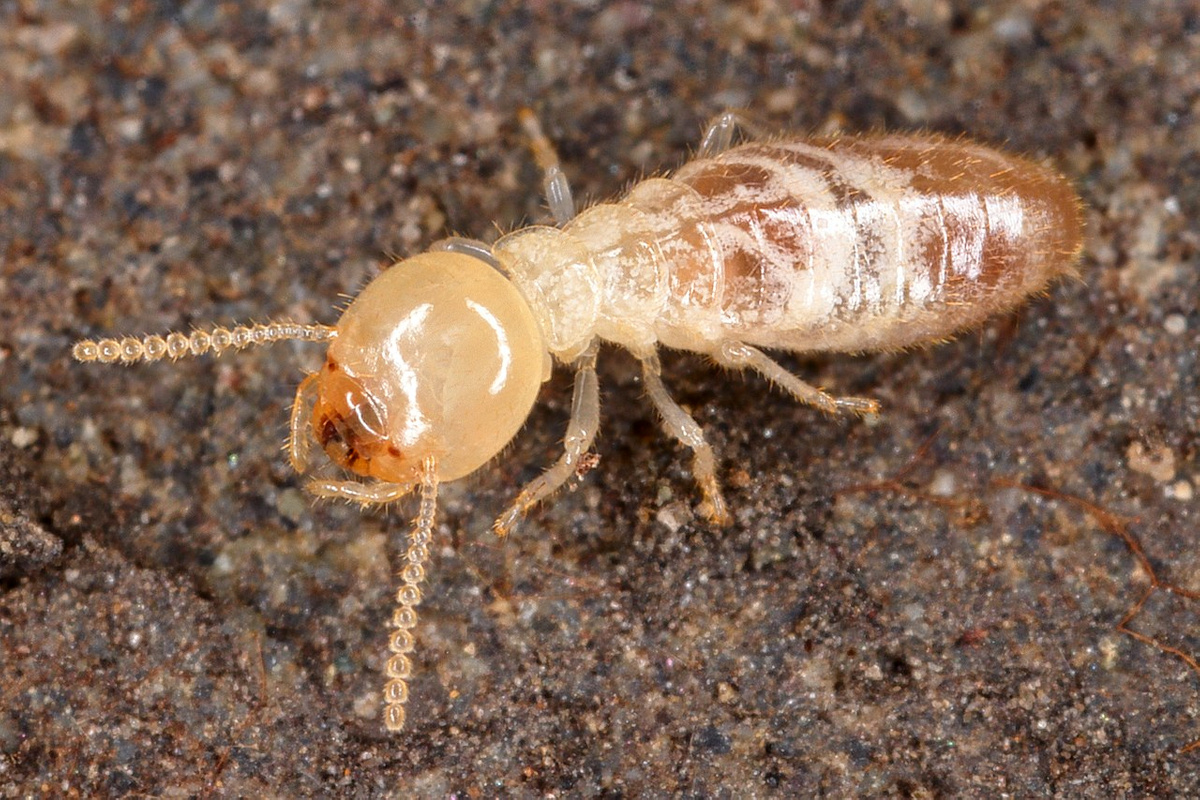 Termites have a ten-segmented abdomen with two plates, the tergites and the sternites. The tenth abdominal segment has a pair of short cerci. There are ten tergites, of which nine are wide and one is elongated. The reproductive organs are similar to those in cockroaches but are more simplified. For example, the intromittent organ is not present in male alates, and the sperm is either immotile or aflagellate. However, Mastotermitidae termites have multiflagellate sperm with limited motility. The genitals in females are also simplified. Unlike in other termites, Mastotermitidae females have an ovipositor, a feature strikingly similar to that in female cockroaches.

The non-reproductive castes of termites are wingless and rely exclusively on their six legs for locomotion. The alates fly only for a brief amount of time, so they also rely on their legs. The appearance of the legs is similar in each caste, but the soldiers have larger and heavier legs. The structure of the legs is consistent with other insects: the parts of a leg include a coxa, trochanter, femur, tibia and the tarsus. The number of tibial spurs on an individual's leg varies. Some species of termite have an arolium, located between the claws, which is present in species that climb on smooth surfaces but is absent in most termites.

Unlike in ants, the hind-wings and fore-wings are of equal length. Most of the time, the alates are poor flyers; their technique is to launch themselves in the air and fly in a random direction. Studies show that in comparison to larger termites, smaller termites cannot fly long distances. When a termite is in flight, its wings remain at a right angle, and when the termite is at rest, its wings remain parallel to the body.