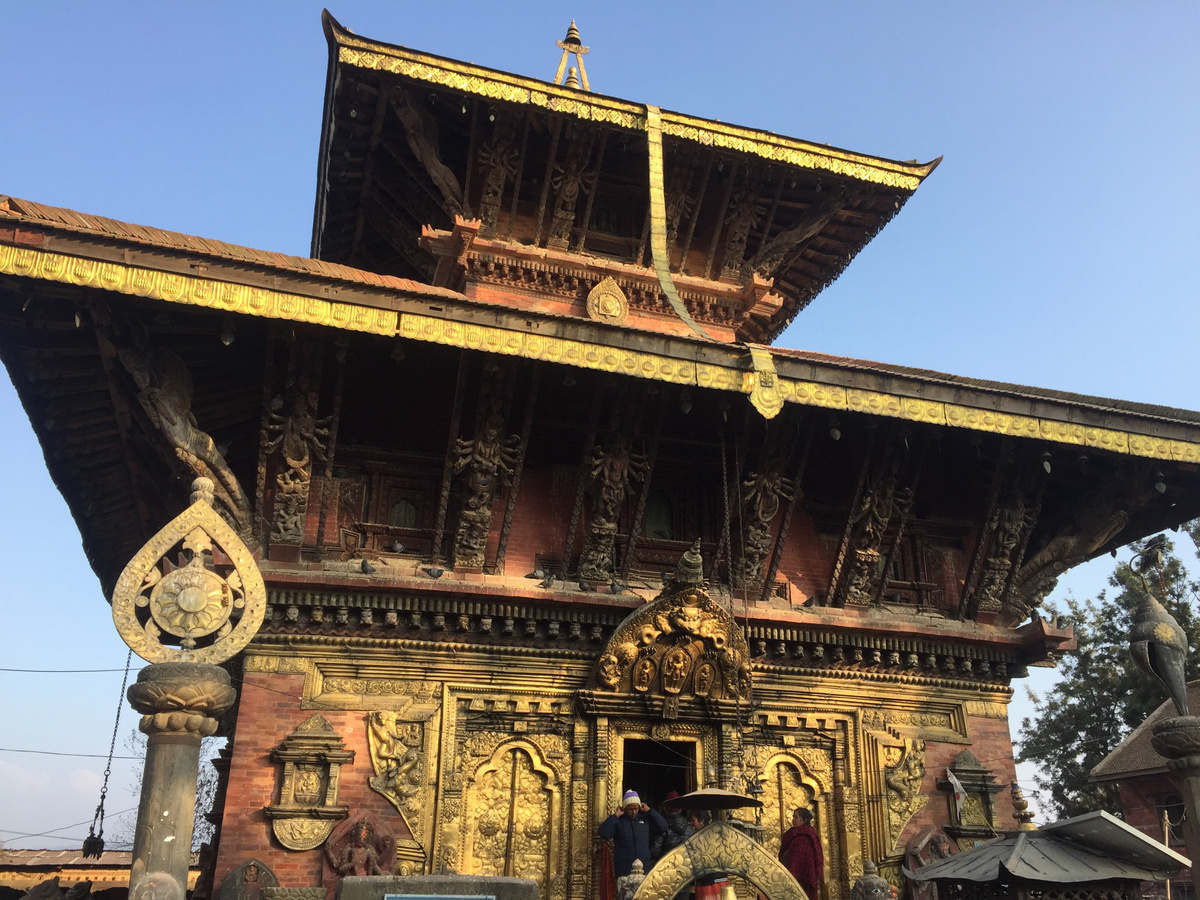 Situated on the top of a narrow hill, north of Bhaktapur, is the magnificent and historic temple of Changu Narayan, which comprises carvings from the 4th to the 9thcentury. This living museum is a UNESCO World Heritage given the genuine works of art for the temple itself and the statues surrounding it.

The single street in the Changu village leads from the car and bus park past the ChanguMuseumto the temple. Walking along will allow you to be introduced to the traditional way of lifeof the local inhabitants.

Just uphill, past some shops selling thangkas, masks, and wooden toys, is a path(pilgrim shelter) enclosing a Ganesh shrine, and just beyond is the courtyard of the Changu Narayan Temple.

Built in the two-tiered pagoda style, the shrine is guarded on all sides by pairs of mythical beasts, lions, elephants and ram-horned griffons and its roof stalkhighlight some amazingly sophisticated carvings of Tantric deities. The statue inside shows Vishnu as Narayan, the creator of all life.

However the beautifully decorated metal-plate doors are only opened for rituals and to Hindus. Facing the west door is a kneeling figure of Garuda said to date from the 5th century.

In front of this statue is the oldest stone inscription in the valley, dating from AD 464, which recalls how the king persuaded his mother not to commit sati (ritual suicide) after his father’s death. Two large pillars carry a conch and Chakra disc, the traditional symbols of Vishnu.

Scattered across the courtyard are a series of extraordinary sculptures dating from the Licchavi era, showing Vishnu in his various avatars (incarnation). In the southwest corner of the conglomerate, Vishnu appears as Narsingha (the incarnation of a man-lion), extracting a demon with his fingers.

Also appears Vikrantha, the six-armed dwarf who transformed himself into a giant capable of crossing the universe in three steps to defeat King Bali.

To the side of these images is a broken slab showing a 10 headed and 10 armed Vishnu, with Ananta stretching out on a snake below. The scenes are divided into three sections: the underworld, the world of man, and the heavens. In the northwest corner of the compound is an exquisite 7th century image of Vishnu.

Down the steps leading east from the temple complex are the one-storey Bhimsen Pati, with its stone guardians, and the remains of a Malla-era royal palace.